Xenon is a member of Squad Noble.

Xenon is a medium height young man with black spiked hair and sharp teeth. His eyes are purple with black irises, and he has a scar over the left side of his face. He also has a chunk missing from his left ear.

Xenon wears a black sleeves cloak with no shirt underneath, showing his other scars. His arms are wrapped in bandages. He wears a purple belt with black pants torn at the knees, and his boots are black with purple accents.

Xenon has also appeared in two other more casual outfits. One is a purple t-shirt with a white pattern on it, and black shorts. The other is a ripped, black tank-top with black pants and a purple belt.

Like all Periodica, Xenon can heal most injuries so long as he starts soon enough, otherwise the injuries will leave scars or be fatal. He can regenerate entire limbs due to being a gas if he tries as soon as possible.

Xenon has all the powers of a standard Xenon, including: 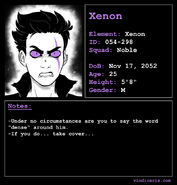 Retrieved from "https://vindicaris.fandom.com/wiki/Xenon?oldid=787"
Community content is available under CC-BY-SA unless otherwise noted.