Sulfur 016-206, aka Sully, is a Sulfur Periodica, and a member of Squad Ballistic.

Sully is a very tall woman, with large circular eyes. Her yellow hair is tied back in a ponytail, and she has a swoop of hair in the front. She wears an earpiece and mic in her left ear.

Sully wears a black and yellow skintight suit with black sleeves and yellow bracelets. She has a white ammo belt and black skintight pants. Her knee-high boots are white with yellow accents.

She's typically seen with her sniper rifle strapped to her back or in hand. 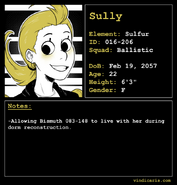 introduction
Add a photo to this gallery

Retrieved from "https://vindicaris.fandom.com/wiki/Sully?oldid=841"
Community content is available under CC-BY-SA unless otherwise noted.