Selenium 034-078, aka Sel, is one of the main characters of Vindicaris. She helps Ces in their effort to defeat Systema Periodica Laboratories.

Sel is a short woman with yellow eyes and a small scar on her right cheek. She has black hair with a little yellow streak, and keeps it in a loose ponytail. Sel wears a black skirt and waistcoat with a white dress shirt underneath. She also wears black, fingerless gloves, and does not have a left arm.

Three years prior to the comic's start, on January 28, 2074[1], Sel was suspended from field training due to severely injuring another Periodica.

During the Late April Attack, Sel is trapped under rubble until Ces saves her. Ces brings her back to their hideout and learns she is missing her left arm. Ces calms her down and gives her a cup of ramen. Sel listens to Ces talk about how Systema treats Periodica poorly, and agrees to help them fight back against this.

Like all Periodica, Sel can regenerate damaged body parts so long as she starts soon enough, otherwise the injuries will leave scars. She can't regenerate her missing arm due to being a nonmetal.

After being rescued during the Late April Attack, Sel agrees to help with Ces' efforts. While the two have similar views on Systema, Sel finds herself questioning the situation often, much to Ces' annoyance.

It is implied that Sel dislikes The Inhibitors due to them trying to kill she and Ces. 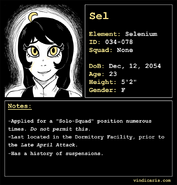 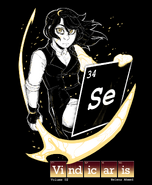 Retrieved from "https://vindicaris.fandom.com/wiki/Sel?oldid=822"
Community content is available under CC-BY-SA unless otherwise noted.