Nic is an Arsenic Periodica , and the leader of Squad Ballistic.

Nic is a muscular man with a green Mohawk and goatee. His sideburns are shaved at a sharp angle.

Nic wears dark sunglasses, with an earpiece and mic in his right ear. He has a black sleeveless top and green camouflage-patterned bandanna. His cargo pants are also camouflage-patterned, and are tucked into his combat boots. Nic wraps his hands and wrists in bandages.

Like all Periodica, Nic can regenerate damaged body parts so long as he starts soon enough, otherwise the injuries will leave scars. He can't regenerate entire limbs due to being a nonmetal.

Nic has all the powers of a standard Arsenic, including: 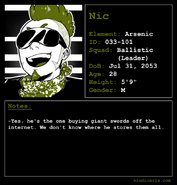 Introduction
Add a photo to this gallery

Retrieved from "https://vindicaris.fandom.com/wiki/Nic?oldid=831"
Community content is available under CC-BY-SA unless otherwise noted.