Cleaning up after the party

Neon is a member of Squad Noble.

Neon is a short, non-binary Periodica with white hair and orange eyes. Notably they have a scar that runs across both their eyes, which their goggles cover most of the time. They wear a tight, black and orange bodysuit, with the stomach and upper arms exposed. As well as Orange and black goggles which have animated eyes, as well as a pair of headphones.

Neon has been seen in two other, more casual outfits as well. The first is an orange t-shirt and black track pants with an orange stripe down the sides. Notably they are not wearing any goggles in this outfit. The second is a long sleeve orange shirt with thumb holes. a black, white and orange jacket, and black pants with orange stripes.

Like all Periodica, Neon can heal most injuries so long as they start soon enough, otherwise the injuries will leave scars or be fatal. They can regenerate entire limbs due to being a gas if they try as soon as possible.

Neon has all the powers of a standard Neon, including:

Neon's orange color can also glow, despite not being a Radioactive. 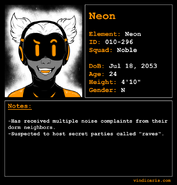 first appearance
Add a photo to this gallery
Retrieved from "https://vindicaris.fandom.com/wiki/Neon?oldid=808"
Community content is available under CC-BY-SA unless otherwise noted.