Not going on missions, writing reports

Gora is the leader of Squad Noble, as well as a model for Rogue Magazine.

Gora is a regal woman with pinkish-red hair, eyes, and make up. She wears a black choker and dress with pinkish-red tights and black shoes. Her glasses are round, and she has a Hydrone earring on her left ear.

Gora can be seen in a more casual outfit of pinkish-red slacks, a black top and a black headband.

Like all Periodica, Gora can heal most injuries so long as she starts soon enough, otherwise the injuries will leave scars or be fatal. She can regenerate entire limbs due to being a gas if she tries as soon as possible.

Gora has all the powers of a standard Argon, including:

Xenon is one of her teammates and childhood friends. Gora has learned to tolerate his strange quirks over time.

Neon is one of her teammates and childhood friends. 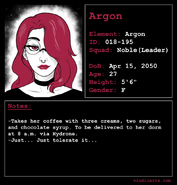 Retrieved from "https://vindicaris.fandom.com/wiki/Gora?oldid=813"
Community content is available under CC-BY-SA unless otherwise noted.