Cesium 055-037, aka Ces, is one of the main characters of Vindicaris. Their goal is to take down Systema Periodica Laboratories due to its unfair treatment of Periodica.

Ces is a tall, androgynous Periodica with pink hair and eyes. They always cover their right eye with their hair, and wear a gas mask over the lower half of their face.

In their debut, Ces wears a black poncho-like garment that hides a scar on their right upper arm. They also wear a tank top, jeans, and fingerless gloves.

In the Prologue, Ces wears a white t-shirt with a pink and black stripe on the top, and white pants. During their fight with Arbo, Ces wears a black sleeveless hoodie with a white long sleeved shirt underneath, along with their usual gloves and jeans.

Most recently, Ces wears a pink t-shirt with three white strips in the middle, along with a black hoodie and gloves. They have a black beanie, and torn black jeans.

Ces was the first stable Cesium created in 15 years. They were last located working for Barron Wellington, prior to his mansion's destruction. It is unknown why Ces was there, or how the mansion was destroyed.

During the Late April Attack, Ces finds and rescues Sel, and takes her to their hideout in The Tower's storage attic. Ces calms her down after she discovers her missing arm. In the kitchen room, Ces states they're not affiliated with Systema anymore because they treat Periodica like slaves. Sel then joins Ces's efforts to take down Systema.

Months later, Ces and Sel go to Systema Bridge. Sel drags and traps a car underneath the bridge. Ces drags the driver out of the car, takes his wallet, and kicks him into the river. Ces and Sel steal the man's car and drive it back to The Tower. The same evening, Ces and Sel eat dinner and watch the movie "Space Assassins 3: Comet Insectoids Attack!" Ces surprised that Sel is crying over the movie considering they've watched it multiple times. Ces learns Sel didn't take notes on the movie, and provides her their own, stating "Ambushes are awesome! Romance is overrated". Sel crumples the note, surprising Ces and causing them to go on a tangent about the movie. Sel yawns in the middle of this, and goes to bed. Ces goes to sleep soon after.

The next week, Ces and Sel stand on a rooftop, looking for Systema employees. They capture one in an alley off screen, and Sel kills her. Ces and Sel start to leave before the authorities arrive, but three Inhibitors grunts shoot at them. Ces attempts to attack them, but their attack is blocked. A grunt tases Ces a couple times, immobilizing them.

Like all Periodica, Ces can heal most injuries so long as they start soon enough, otherwise the injuries will leave scars or be fatal. They can't regenerate entire limbs due to being a metal.

Ces has all the powers of a standard Cesium, including:

After rescuing her during the Late April Attack, Sel became Ces's friend and partner in crime. Ces considers Sel to be their best and only friend. Ces is aware of how stressed Sel is about their lives, and occasionally does things to cheer her up. Ces gets Sel her favorite pancakes[1], and lets her take breaks from killing when she becomes uncomfortable with it.[2]

Despite this, Ces has very little tolerance for Sel's back talking, often yelling or getting in response.[3] Ces usually apologizes afterwards.

Ces seems to have a negative history with Platinum.

It is implied that Ces dislikes The Inhibitors due to them trying to kill Ces and Sel. 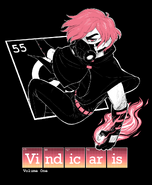 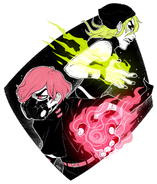 Retrieved from "https://vindicaris.fandom.com/wiki/Ces?oldid=848"
Community content is available under CC-BY-SA unless otherwise noted.