Bis is a Bismuth Periodica, and a member of Squad Ballistic.

Bis is a short, dark-skinned woman with a Frohawk and braids. Her eyes are gray with three vertical white lines in the irises. She has a black bar on each cheek. She ears an earpiece and mic in her left ear.

Bis wears a black t-shirt with a white coded "B" on the front, and black fingerless gloves. She also wears a gray fanny pack around her waist, and white shorts with black stripes on the side. She has a brace on her left knee, and big black shoes. 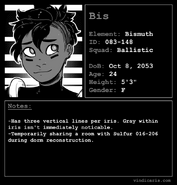 Retrieved from "https://vindicaris.fandom.com/wiki/Bis?oldid=833"
Community content is available under CC-BY-SA unless otherwise noted.