Carbon 006-214, aka Arbo, is one of the main characters of Vindicaris.

Arbo is a tall, thin young man. His black hair is brushed back with two teal streaks, and his eyes are teal with black irises. He wears diamond earrings, and a monocle over his right eye.

In his debut, Arbo wears a black suit with teal accents and flowers. The jacket has large pointed shoulder pads with teal undersides, striped sleeves, and a teal coattail. Underneath, he wears a white dress shirt, floral vest, and teal bow tie. His pants and dress shoes are black with teal accents.

Arbo is charismatic and appears confident in himself. He tries to talk his way out of fighting Ces and Sel in the sewers.

On September 5th 2077, Arbo is assigned to escort a scientist home from work. He goes looking for the scientists when he doesn't return from a fast food place, and finds Ces and Sel trying to kill him in the sewers. Arbo saves the scientist and is about to leave when Ces challenges him to a fight.

Arbo defends against Ces's attacks using his cane, but is cornered by them and Sel. He breaks his carbon cane into shards and shoots them at Ces and Sel. Sel shields against them but Ces is stabbed repeatedly and faints. Sel, enraged, stabs Arbo through the chest and throws him across the tunnel. He apologies to Fluor through her Hydrone, and blacks out.

Like all Periodica, Arbo can heal most injuries so long as he starts soon enough, otherwise the injuries will leave scars or be fatal. He can't regenerate entire limbs due to being a nonmetal.

Arbo has most powers of a standard Carbon, including:

Unlike other Carbons, Arbo has not been shown turning black carbon into diamonds and vice versa.

Arbo and Fluor have a sibling-like relationship, as Fluor refers to him as her brother. 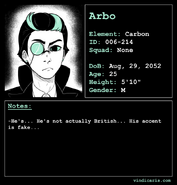 debut
Add a photo to this gallery

Retrieved from "https://vindicaris.fandom.com/wiki/Arbo?oldid=821"
Community content is available under CC-BY-SA unless otherwise noted.