Running in the halls

Andi is a Scandium Periodica, and a member of Squad Ballistic.

Andi is an androgynous, medium-height Periodica. Their hair is white with dark reddish-orange streaks, and is shaved on the right side of their head. They wear orange goggles over their pure-white eyes.

Andi wears a black and orange binder. Their black track pants have white stripes on the sides, and are tucked into knee-high boots. Their black boots have tall white and orange heels.

Briefly after their debut, Andi wears a Hydrone earpiece and mic in their right ear. It reforms to have a long blade coming from the "eye" of the drone. 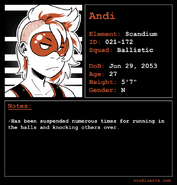 Retrieved from "https://vindicaris.fandom.com/wiki/Andi?oldid=827"
Community content is available under CC-BY-SA unless otherwise noted.